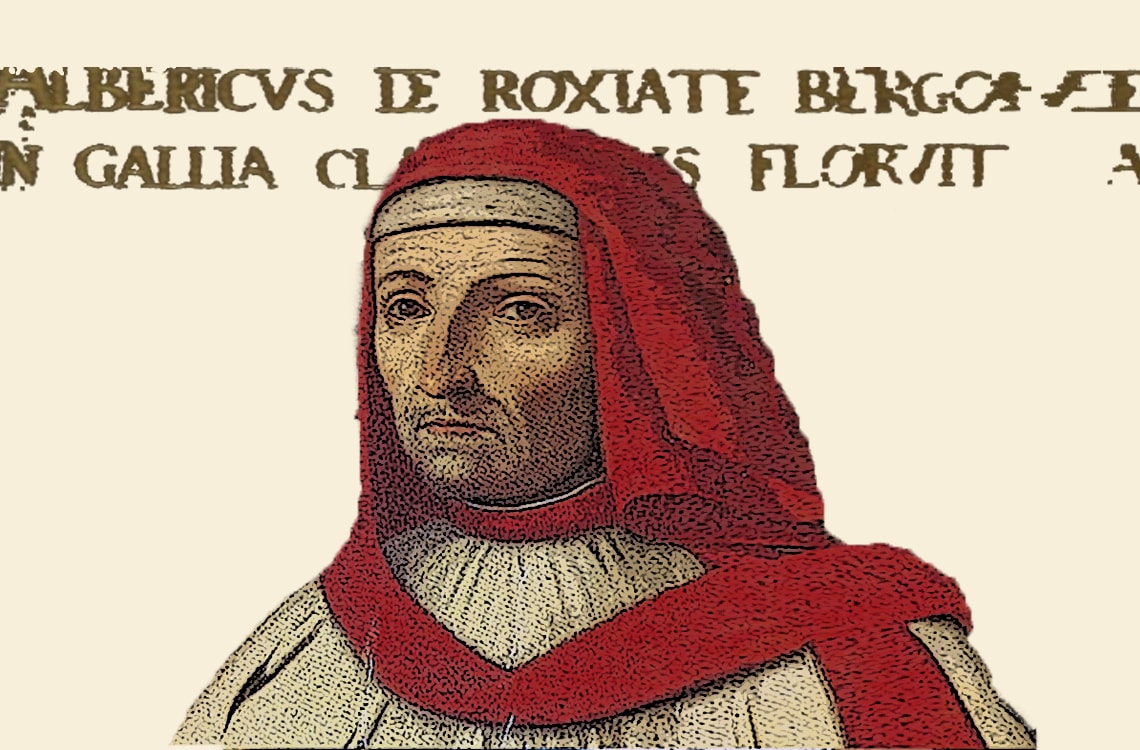 A brief journey between history and literature, the first written records about «moscadello vermiglio» (“vermilion red moscadello”), moderately sweet from the Scanzorosciate hills.

Alberico da Rosciate, also known as Alberico da Rosate or Alberico Rosciati, is a prominent figure in the history of Moscato di Scanzo. Born to a noble family native of the hamlet Rosciate in 1290, he was a well-known jurist, scholar and Italian ambassador, so illustrious that the main square of Scanzorosciate is dedicated to him, that is Alberico da Rosciate Square.

Thank to Alberico da Rosciate we have the first written record about Moscato di Scanzo: in one of his correspondence dated 8th June 1347 Alberico gave to a certain Jonolo da Priatini some moscadello produced in the Bergamo area.

1350 – a red Moscato vineyard as inheritance.

A second landmark record is found on the personal will of Alberico da Rosciate – dated 26th March 1350 – on which he expressed his will about one of his properties as follows: « […] I bequeath to the son Tacino the Bersalenda, the place where red moscato is cultivated […] ».

The centrality of Alberico da Rosciate in the records about the ancient history of Moscato is marked by the decision of the Protection Consortium to use his image on its coat of arms next to another character, Simone da Scanzo (well-know because he fought for the Republic of Venice).

1372 – The bishop of Tribulina wanted to be paid with moscadello.

Tribulina is one of the hamlet of Scanzorosciate. Here we found a record on the Censualis della Mensa Vescovile (census of the bishop estate) dated back to 1372: it is a sharecropping contract about a vineyard in another hamlet of the town, Gavarno, in which the feudatory bishop of Tribulina refered to the quantity of moscadello that the two sharecroppers owed him as fee to work his soil.

1378 – Vermilion moscadello appeared in the Guelphs and Ghibellines chronicles.

A certain Castello Castelli, author of Cronaca delle cose occorse in Bergamo negli anni 1378-1407 ( a chronicle of what happened in Bergamo between 1378 and 1407), told the events between Guelphs and Ghibellines, events that he took part in too fighting for Ghibellines, referring to moscadello vermiglio di Scanzo several times.

Afterwards, the two factions were mentioned by Donato Calvi, a famous seventeenth-century scholar from Piazza Brembana, who, in his Effemeride sacra profana di quanto di memorabile sia successo in Bergamo (sacred and secular ephemeris about memorable events happened in Bergamo) he quoted an armed conflict between Guelphs of Scanzo and Ghibellines of Rosciate in 1398, a conflict that did not break out due to political reasons, rather to the will of gaining possession of a load of Moscato: « […] Two hundred Guelphs from the city and the hamlets came to Scanzo, pillaged all Ghibellines houses and plundered sixty cases of wine, both moscatello and vermilion […] ».

Such evident references clearly prove the existence of a wine that was already known with the name Moscatello. A certainly valuable wine, so much that it was a reason for plundering.